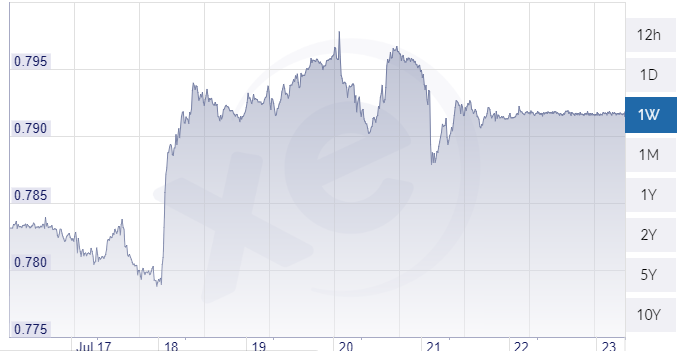 Here is a brief outlook on likely market-movers.

In the U.S., politics are more than likely to influence the U.S. dollar just as it happened last week. As you can recall, Failure of the Trump administration to pass healthcare bill coupled with the ongoing “Russia connection” investigations triggered a sell-off.

Consumer pricing Index (Wednesday)-An unexpected report can Impact the pair sharply. In Q1, CPI stagnated at 0.5% falling short by 0.1% from the 0.6% forecast.The forecast for second quarter stands at 0.4%.

Import prices (Thursday)-In the first quarter, import prices were better than expected with a 1.2% gain against -0.4% forecast (the highest since 2015).Q2 estimate stands at 0.7%.

PPI (Friday)-The inflation level indicator is released on a quarterly basis. It remained unchanged in the first quarter, having recorded a 0.5% gain above the 0.3% forecast. Another gain is expected in the second quarter, 0.6%.

With the growing concerns on whether or not the Fed will raise rates in December, mixed numbers for Q2 and low inflation, I am bullish for AUD/USD.

Similar to AUD/USD, EUR/USD also had a good week, thanks to the political intrigues in United States that triggered a sell-off in the U.S. Dollar. This coming week has a number of GDP, inflation and PMIs figures to be on the lookout for.

PMIs (Monday)-Any score above 50 is likely to influence the markets positively. Forecasted scores are 54.6 and 57.3 for French and Germany Manufacturing PMIs respectively.

German Bundesbank Report (Monday)– A monthly assessment of the economy will be released on Monday. The assessment is expected to report satisfactory growth and low unemployment.

German Import Prices (Tuesday) – In May, German import prices dropped 1% and the trend is expected with a further 0.6% slide. This will however have minimal impact on the EUR.

Spanish Unemployment rate (Thursday)-Spain, which is the fourth Largest economy among EU member states, still has high unemployment levels. A slide to 17.9% from 18.8% is very much on the cards.

Monetary date (Thursday)-Money supply has been at 5% in May. Prrivate loans on the other hand rose 2.6% and they could continue rising. Money supply forecast stand at 5% Y/Y and the level of loans is expected to rise by 2.7%.

French GDP and CPI (Friday)-France had a solid growth rate of 0.5% for Q1 2017.We are expecting a similar result on Friday. In June, Month-over-Month prices stagnated as it was expected. However, a slide of 0.4% m/m is expected this month.

French CPI and GDP (Friday)-In June, Inflation rose to 3% before steadily falling back to 1.5%.Preliminary rate for July will be released on Friday and a 1.5% hike is on the cards. Spain growth rate was persistent with 0.8% seen in Q1.The stellar results are likely to be replicated with 0.9% for Q2 on the cards.

Read more on USD here
The EUR/USD had a good run last week and the trend is likely to continue with more volatility on Monday and most probably on Friday. However, apart from the correction, ECB could have a negative impact on euro’s good run.